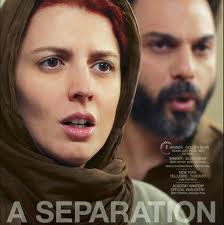 A Separation is the winner of the Best Foreign Language Film award at this year’s Academy Awards. I would highly recommend this film to any of my blog readers. The story takes place in contemporary Iran. The language spoken is Persian.

This is a story of unfortunate events. The film opens with Simin, a wife, asking the courts to grant her a divorce. She explains that she wants to leave Iran and live abroad with her husband, Nadar, and daughter, Termeh. She has made all the necessary arrangements for their departure. The only problem is that Nadar refuses to go, as he feels a deep responsibility to care for his elderly father who has Alzheimer’s. Simin decides to, at least, leave her non-compliant husband, and moves in with her mother.

Nadar hires Razieh, a deeply religious woman, to take care of his father while he’s at work. Razieh is pregnant but does not tell her husband, Hodjat, that she is working. She takes the job because she wants to help him pay back his creditors. However, it’s not long before major problems arise with the arrangement — problems with serious legal and religious implications.

This is the best Iranian film I’ve ever seen, okay, it’s the only Iranian film I’ve ever seen. Still, I found it beautifully acted. The direction is perfect. The symbol of partitions and literal separations are used throughout the film very effectively. The characters are flawed and complex which only serves to heighten the drama. I became fully involved in the character’s lives from the start. Interestingly, I found the divide, between the values of Iranian society and our western society, vanished in the telling of this sad story. What emerges, almost immediately in that first scene, is the sense that despite our cultural differences we are very much the same people. It’s the human experience, how we deal with tragedy and trials, what we feel and the choices we make, that tie us together.

SEE IT if you’d like to experience a slice of Iranian life, if you love a good story and like to leave the theater still feeling attached to the characters. DON’T SEE IT if you’re  a closed minded simpleton.

← Thirsting for Knowledge Thursday…
I’ve Got You Covered… →

24 thoughts on “A Separation”