I remember cutting through people’s yards when I was young, always feeling a little nervous that I’d get caught. Looking back I now realize that no one would have yelled at me or, worse, shot at me with a bb gun, so why was I so nervous? Where did my fear of trespassing come from? Let’s time travel back and take a look, shall we….? 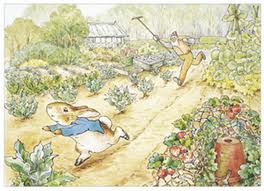 When I think of “Peter Rabbit” I immediately conjure up images of Mr. McGregor chasing Peter through the garden with a rake. Something about that old man use to scare me. Had Peter not escaped, I’m pretty sure that Mr. McGregor would have made a fine rabbit stew out of him, pieces of his little blue velvet jacket floating in the broth.

If there was ever a Trespassing genre, “The Wizard of Oz” would top the list. Everywhere Dorothy and Toto went was some sort of scary private property. Even the Wizard, whose supposed to be so helpful, turns out to be all crotchety when Dorothy and friends enter his domain, and don’t even get me started on the Witch’s castle, although I will say this for her, she did seem excited to see them. What were kids supposed to take away from this story? “There’s no place like home?” What about, don’t venture out because other people will try to kill you? *There’s one other unrelated message which comes at the end, one that I’ve tried to adhere to for most of my life; Just stay in bed and talk crazy so people will lower their expectations of you – you might even get a cool rag on your forehead.

Hansel and Gretel, is one of the more disturbing children’s trespassing tales and where my fear of ovens and cages probably comes from. Then of course there’s Goldilocks, a girl with absolutely no boundaries or manners. Wasn’t it enough that she ate their porridge, did she really have to get in their beds?

Anyway, the list goes on and on… By the time we enter into our pre-adolescent phase we’ve been completely conditioned to fear the deadly consequences of breaching property lines. Consequences that include, being cooked and eaten, being bludgeoned, being set on fire, being drugged (as was the case with the poppy field – although not a terrible consequence in my estimation), being woken by angry bears, starving, and being air lifted by flying monkeys, etc.

Almost every summer day of my youth was spent at the Pool and Tennis Club.  I loved hanging out there with my friends. The problem was in getting there. In order to get to the club I had to cut through someone’s backyard, someone who lived five houses down from us. (I never saw those neighbors coming or going which made it all the more mysterious) Even as I approached the house my heart would start pounding. I’d look around, secure the towel around my shoulders and climb over the fence. Okay, the fence was a split rail fence and low to the ground, but I still felt it was an obstacle. My eyes would dart about, yeah, so maybe I was looking for flying monkeys, old men with  rakes, and witches. Can you blame me? Once over the fence I would hurry around the perimeter until I reached the tree line in the back yard and quickly disappear into the thicket. I felt safer in the woods, but it wasn’t until I emerged on the far end of the tennis courts that I could finally breath. Safety. Civilization. The familiar sound of tennis balls being slammed. I had survived yet another run through the gauntlet which, in some strange way, has come to represent my youth.