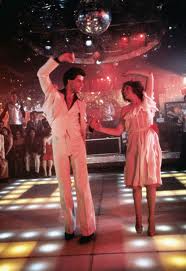 What comes to mind when you hear the word, “Disco?” Be honest. I know some people probably cringe, but not me. It was it’s own unique period of music, that’s for sure.

Disco was not so much about the lyrics, not at all. It was more about the dancing and the music. Disco, by definition, is popular dance music, especially of the mid to late 1970’s. I’m guessing it’s short for “Discotheque?” There was something about those repetitive bass rhythms that caused a whole generation to want to slip into their finest polyester and dance the night away.

There was also something sad about that time period. I can’t quite put my finger on it. (I’m not talking about the clothes, although they were sad.) Maybe it was a numbing sort of time in our history — sex, drugs and lots of disco? Studio 54, which was in all it’s glory during that time, probably represents a sort of microcosm of a society in decline. So many people fell from grace, becoming consumed with an empty lifestyle… The tag line for the movie, “Saturday Night Fever” was, “Where do you go when the record is over?”

So, back to my original question —  What comes to mind when you hear the word, “Disco?”

Here are some of my favorite songs from that era. Mind you, I love to dance, so naturally if a song had a great rhythm I’d be on the dance floor. Also, the Bee Gees and Donna Summer pretty much ruled the airwaves, THEY WERE DISCO.

** For those of you who might not be aware, Robin Gibb is in a coma and is reported to be near death. He’s been battling colon and liver cancer for some time. Very sad.

← What NOT to see at the theaters this weekend…
Bluebirds, Swimming, and Roman Numerals… →