It’s another dismal weekend for movies. Am I desperate enough for popcorn that I would go see Tim Burton’s “Dark Shadows” or does that look incredibly lame and unfunny? I’ll definitely avoid, “What to Expect When You’re Expecting” — Why? Because I expect to be completely underwhelmed. I’ll also skip “The Dictator” for obvious reasons, the first being that it looks sooo bad. (What the heck happened to poor Ben Kingsley? He used to be a respectable actor. Sigh.) “Battleship” looks dreadful and “Girl In Progress” got slammed by the critics.

If any of you venture out to see these films, (I won’t judge you), and find that they actually do have entertainment value, please report back and I will amend my statements.

Snow White and the Huntsman – From what I can tell of the trailer, this looks VERY well done. 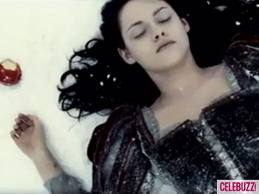 I don’t love Kristin Stewart that much. Is it wrong of me to root for the evil witch?

Brave – Pixar’s newest offering will surely be a lot of fun. This is the summer for girls who rock a bow and arrow. I love it! Anyway, I’m a sucker for Disney and Pixar.

Prometheus – Ooh, This looks scary good and it’s got Michael Fassbender in it — so basically nothing can stop me. (…although he is sporting artificial blonde hair which is a bit of a bummer.) I usually don’t like Science fiction as a genre, but Ridley Scott is a great director so it should be exciting.

For those of you who would like to watch something this weekend that has heart and soul I would suggest asking Free Penny Press for her recommendations. (See her May 14th entry Monday Movie picks) She’s a purist when it comes to film (she’s a strict independent and foreign film person – she doesn’t venture out to bad movies for popcorn like I do!) and has chosen several interesting Independent films for our viewing pleasure. Check her out.

← My Strange Addictions…
My Mixed Tape… →