I wrote a screenplay twelve or so years ago. The name of it was, Brand New Me. It was a romantic comedy about a neurotic, stunted therapist who one day finds that her high school nemesis has been randomly added to her case load at the agency where she works. She recognizes the name and face immediately, even though it’s been thirty years, but her client is completely unaware. Twisted psychological games ensue.

I’m sure you’re wondering about the romantic comedy aspect, right? Well, it just so happens that Leslie Payne, the therapist, has a shrine in her closet to David Cassidy, where she worships him daily. She talks to him and pretends he’s her boyfriend. She applies the lyrics from the Partridge Family songs to her troubled life – her version of a self-help book.

Fast forward, stuff happens, and Leslie is on her way to a class reunion. On the airplane she is seated next to a David Cassidy look-alike (that was the plan unless I could get the real David Cassidy). He’s slightly confrontational, a little smug, but also quite charming, and just like in real life, he is a true boy-man.  As much as Leslie is put off by his know-it-all attitude, she is attracted, nonetheless.

Oh my gosh, I just love her face!

As it turns out, this little dyslexic screenplay writer was able to attract the attention of Annette Bening to play the role of Leslie Payne. I was even able to meet her for lunch at the Four Seasons in Beverly Hills. Let me tell you, she was every bit the person that you believe her to be. She couldn’t have been more charming and thoughtful. She’s not just a talented actress, she’s an intelligent and beautiful spirit, a real gem. Don’t even get me started on her voice – I love her voice quality, don’t you?

More good things happened, lots of positive feedback, and it looked like it would find its way to a studio for production. Then, sadly, it sort of fell apart – as many projects do. 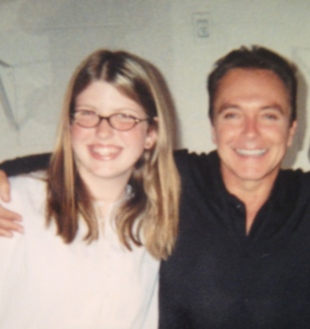 Before it fell apart though, it just so happened that David Cassidy was on tour, and playing in Aurora, Illinois.  What good fortune! I got the script to him, attended the concert, which, by the way, was full of women my age acting like 12 year olds, and afterward, met with him in his dressing room. We enthusiastically discussed the screenplay. He thought Chuck Lampley would be a fun part to play – right up his alley. It was amazing! He was so very kind and sincere. He still had that sparkle in his eye and was, as I’d imagined him to be, light-hearted, a genuinely happy, good person. It was a thrill to meet him even though I wished it had been 25 years earlier. (Lily, my daughter, was with me on this fun occasion, and got a picture with David Cassidy. She was probably around 12 or 13 at the time.)

The name of the screenplay, Brand New Me, is a Partridge Family song. I thought it worked perfectly. It’s probably still a viable screenplay and just needs to be tweaked and updated, if anyone is interested? And if Annette Bening or David Cassidy happens to read this post, thank you for being a part of my Gripping Life. (I was going to say, “I Think I Love You,” but thought it would be too much.)